The viewability of display ads is nearly one-third higher on news sites than the industry standard, a study for an alliance of a dozen global publishers and media owners has found.

The World Media Group claims the research shows advertising on “quality journalism” sites has had a “halo effect” as consumers have been gravitating towards trusted news sources in recent years in an era of fake news.

The WMG, whose members include The Atlantic, Bloomberg Media Group, Business Insider, The Economist,Forbes, Fortune, National Geographic, Reuters, Time, The Wall Street Journal and The Washington Post, commissioned Moat, a third-party analytics and measurement company, to carry out the study.

The “in-view” rate – the proportion of users who saw an ad – was 67% for mobile display ads on WMG sites. That’s 32% higher than the industry standard, according to Moat’s research.

And the “in-view” rate was 72% for desktop display on WMG properties – 27% higher than the industry standard.

Moat counted an ad as “in-view” if at least 50% of the ad was seen on screen for at least one second.

Dwell time was also higher, with double-digit improvements for both mobile ads (up 13%) and desktop ads (up 39%) on WMG sites compared with the industry average.

Alex Delamain, chair of the WMG and senior vice-president, head of sales and client services, EMEA, at The Economist, said: “The impact of poor-quality journalism and fake news over the last couple of years has made consumers much more savvy about where they go to for information.

“Trusted editorial sources including the titles in the WMG’s portfolio have experienced a positive boost as a result. We’re now seeing a halo effect, translating into a more engaged audience for advertisers.

“The Moat analysis underscores what we have long believed – that consumers are more receptive to advertising when it’s presented within an environment of high-quality content that they trust.”

Video also had strong results as such ads had a completion rate of 54% on WMG sites – 144% higher than Moat’s benchmark, which measures audibility and visibility.

The video data, which was based on only five WMG members’ sites, counted an ad as “in-view” if at least 50% was seen for at least two seconds.

Damian Douglas, vice-president of the WMG and head of sales for Europe at Bloomberg Media Group, said several factors have been driving advertiser behaviour in recent years, including the need for trust, the merits of context versus scale and a “flight to quality”.

Douglas said the fact that WMG members place a premium on the “credibility, accuracy and integrity” of their editorial content makes it “the most brand-safe environment” for advertisers, particularly those that want to reach the C-suite of most senior business leaders.

The “halo effect” extends to search and social channels, where trusted news providers such as WMG titles carry a “stamp of approval that audiences recognise” because they know “where that content has come from”, according to Douglas.

None of the titles in the WMG use any branding or kite-marking on their content to identify they are part of a wider alliance.

The WMG used a third-party company such as Moat because it has a view of the wider market and was not “swayed” by individual publishers inside or outside WMG, meaning advertisers can “trust the results”, Douglas added.

The first word in business news.

“This group of leaders will continue pushing our agency – and the industry – forward to meet our clients’ needs now and for the future.” Congrats to our new Global Chief Creative Officer Tom Beckman and to leadership of our creative & strategic planning teams on their new roles.

JUST IN | In a major restructuring, CBS is combining the journalistic and businesses resources of CBS News and the CBS Television Stations, and tapping Wendy McMahon, Neeraj Khemlani to jointly run it. https://t.co/eXxiJbKPTA 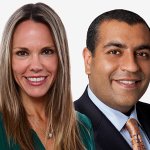